Photo by Anete Lūsiņa via Unsplash.com

How does unemployment factor into job application processes?

What factors influence an application process? Dr. Tamara Gutfleisch researched this for the Luxembourg labor market in the study EDYPOLU (“Employers’ hiring decisions in relation to young people in Luxembourg”).

Analyzing the decision-making mechanisms of recruiters

In her research, Gutfleisch examined the role of hiring intentions among recruiters and what consequences this has for young people’s applications.

Being interviewed by Uwe Hentschel from Science.lu, the labor market researcher reported on the study results: It became clear, among other things, that recruiters are more lenient in their assessment of unemployment directly after graduation or training than at a later point in the curriculum vitae.

Read the Interview at Science.lu

Tamara Gutfleisch received her PhD in 2021 from Prof. Dr. Robin Samuel here at the Centre for Childhood and Youth Research at the University of Luxembourg. She now works at the Mannheim Center for European Social Research. 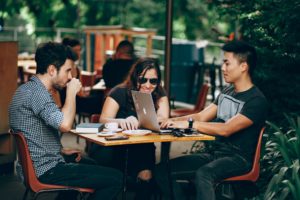