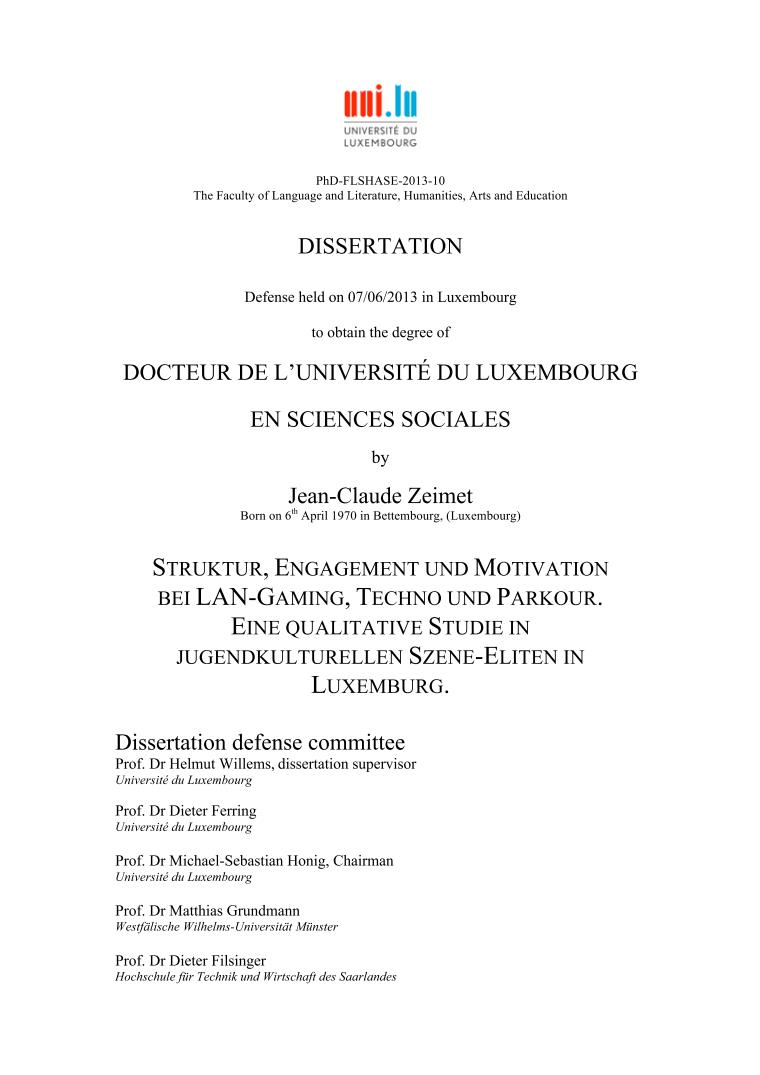 Politics and research in Luxembourg pay little attention to the local youth(sub)cultures despite their manifold activities and high visibility. In youth research und youth studies youth(sub)cultures were mainly perceived in connection with leisure activities and delinquent behaviour but have never been a topic of their own.
The present dissertation expands the existing data and supplements youth research in Luxembourg by adding a further and important element. It allows a first empirical view on Luxembourgish youth(sub)cultures and their scenes. The study is based on a field research project following a qualitative heuristic design (Kleining, 1982) and focussing on three youth(sub)cultures: LAN-gaming, Techno and Parkour. All collected data was subject to a computer aided data analysis on commonalities for the different research topics.
Two research questions emerging from the field study were of main interest. The primarily focus is on the structure of the youth(sub)cultures, the way they are conceived and constituted. Knowledge of the structure is regarded as an essential and important starting point to understand youth(sub)cultures. The structure’s analysis is led by the ‘scene concept’ by Hitzler and Niederbacher (2010b). It could be demonstrated, that the explored youth(sub)cultures can be considered as scenes in terms of the ‘scene concept’. However, the analysis shows some further characteristics, e.g. requirements to join the scene, and the scene’s way to deal with preconceptions. Scenes in Luxembourg seem to show tendencies to break with their informal structure and apparently approach more traditional and formal ways of association. Youth(sub)cultures seem to face some elementary changes and developments in the future. Identifying the framework of the three scenes allowed elaborating an appropriate and meaningful thematic depth. Already at an early stage of the field research it became apparent that few scene members invest considerable time and energy to create and establish the scene. By doing so they are practically also in charge of the scene’s structure. According to the ‘scene concept’ these people could be described as organisational elite – the scene’s motor. Using methods of the free field research concept (Girtler, 2001) the study asked for the motives lying behind this commitment by asking: What lies behind the fun?
So the second research topic targeted first these members’ commitment and could identify decision levels with assigned roles and fields of activity, e.g. the administrator, the organiser or the expert.
The organisational elite’s commitment shows two different stages of motives; motives to start and motives to continue the work. The Maynooth-model was developed to illustrate the findings of this research. It shows the interaction and the circuit of the members’ motives and influencing framework factors. There is a rather enclosed and complex interaction system, which provides room and questions for further research within the field. There’s a lot more than fun to make a scene happen and work